So, do you know how to price your services as an Independent Consultant?

If the answer to the question asked in the title of this piece is no, then you aren't alone.

Our recently conducted survey reveals that 70% of independent contractors and freelancers depend on the client's project budget to negotiate fees for short-term assignments. Also, only 20% of companies have standard slabs and parameters to determine the fee levels for independent consultants/contractors they bring on for projects.

We understand that pricing for your independent consulting services is tough, hands down. 'Asking around' is a hush-hush method commonly used by both freelancers and companies to determine a 'price' for the value a professional brings on-board for any project. Add to that 'one size does not fit all' conundrum and most independent consultants end up searching various articles on the internet on how to go about charging for their time and skills. Have you? Then you’d know about the deluge of different pricing models that come your way, which to put it mildly, aren't uncomplicated.

To reduce this clutter, Flexing It™ has developed its own fee benchmarking tool, FeeBee that plans to enable the entire independent consultant and freelancer community to access real and credible pegs to anchor their fee proposals on and also help organisations to better gauge and develop budgets for consultants, and in the process facilitate more successful connections.

FeeBee, using the benchmarks it has received from independent consultants over time, presents a set of comprehensive statistics that allows professionals to view how their peers have been charging for similar services and how multiple factors influence these consulting rates.

The beta version of FeeBee service was launched in January 2016 and is free of charge for independent contractors. It requires the users to fill in elementary details about the kind of projects they have worked on before, previous compensation and their skill domain. Upon entering this information FeeBee provides you with the benchmarks available for people having the same specialization.

The nuts and bolts of our offerings are as follows

Fee Ranges that exist as per

'On an average, a Strategy and Business Development consultant earns $410-420 per day.'

'In the E-commerce/Online Retail industry, ordinarily, an experienced strategy consultant earns around $60-70 an hour.' 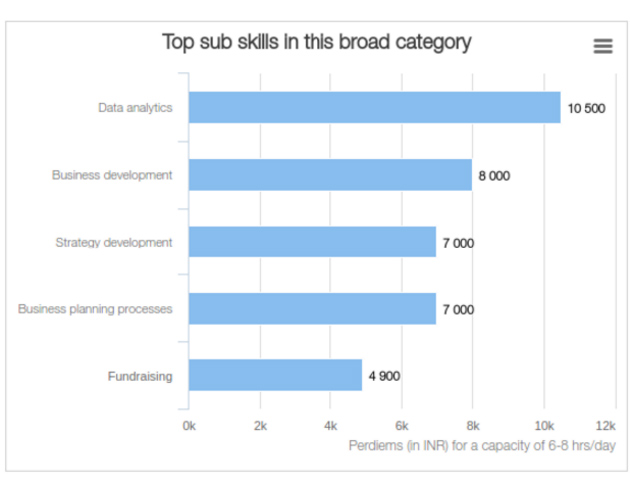 To view the latest fee statistics on independent consultants and explore flexible roles, visit us at http://www.flexingit.com/feebee-smart/

Explore your consulting worth with FeeBee today!

Background Verification is an important tool for professionals to strengthen their skill profile and for organizations to have greater comfort and confidence in hiring the right people as recent surveys have found that one in three resumes in India is falsified.

If you are a professional,

If you are an organisation,

At least one Reference and one Employment

At least one Reference or one Employment

Thank you for registering with us! You will receive a confirmation email with an activation link shortly. Please activate your account to proceed.

Request you to add us to your primary mailing list to avoid missing out on any communication from our side which might otherwise end up in your spam/other folder.

Thank you for registering with us! You will receive a confirmation email with an activation link shortly. Please activate your account to proceed.

Request you to add us to your primary mailing list to avoid missing out on any communication from our side which might otherwise end up in your spam/other folder.

No Thanks, I want to continue reading.